How to Beat Rising Seller Fees on Amazon
October 3, 2022 Posted by FAITH EVANS 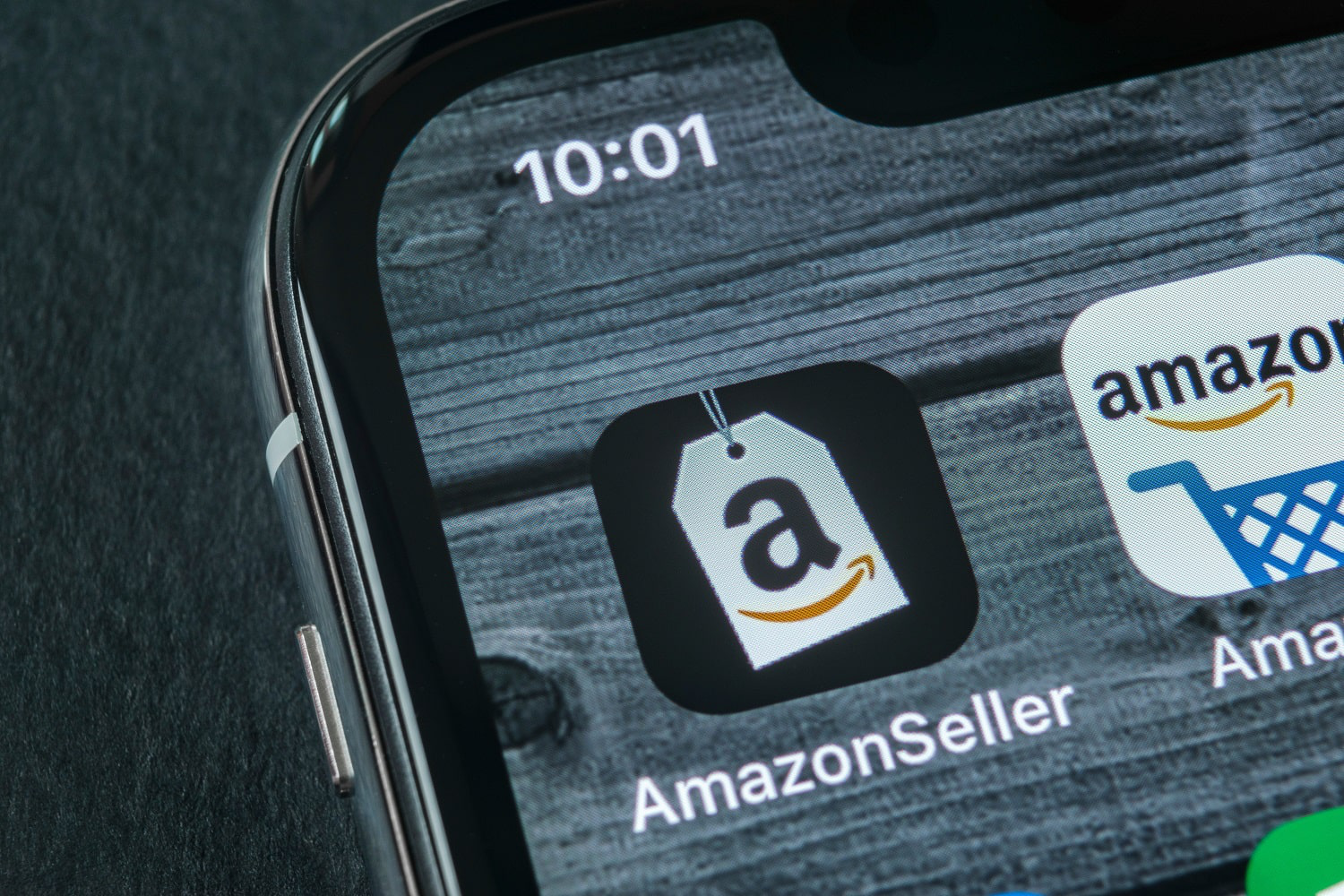 The holiday season is here and Deloitte forecasts growth of 13.5% in e-commerce sales nearing $262 billion this holiday season. The holiday shopping season has proven to be a great opportunity and most sellers can boost their Amazon sales as well as their profits during peak holiday times. However, sellers should be aware of some Amazon fees that are increasing during holiday times which can eat up some of their profits.

Recently, Amazon has announced its intentions to raise fulfillment fees during the upcoming holiday season in order to deal with rising inflation. This will shift some of the increased costs of doing business to Amazon sellers who sell their products on Amazon.

In this vein, the announcement introduced a holiday peak fulfillment fee from October 15th until January 14th to offset rising costs of Amazon’s labor and logistics. According to this newly introduced fee, sellers using Fulfillment by Amazon (FBA) will pay an additional 35 cents on average for every item they sold in the US and Canada. For instance, if you sell 10,000 items per month, then you will be charged an extra $10,500 in total for Q4. FBA is popular with many sellers because it delegates the responsibility of collecting, packing, and shipping items to Amazon. This additional fee during the holiday season does not include FBA charges that sellers already pay (fees based on category, weight, and item size).

The new charge comes on top of an April hike in fees which added a 5% “fuel and inflation” surcharge which was introduced in response to the unprecedented rise in the cost of gas caused by the war in Ukraine. The war has also hit adversely affected supply chain operations, and there was an added drain on Amazon’s admittedly large cash reserves 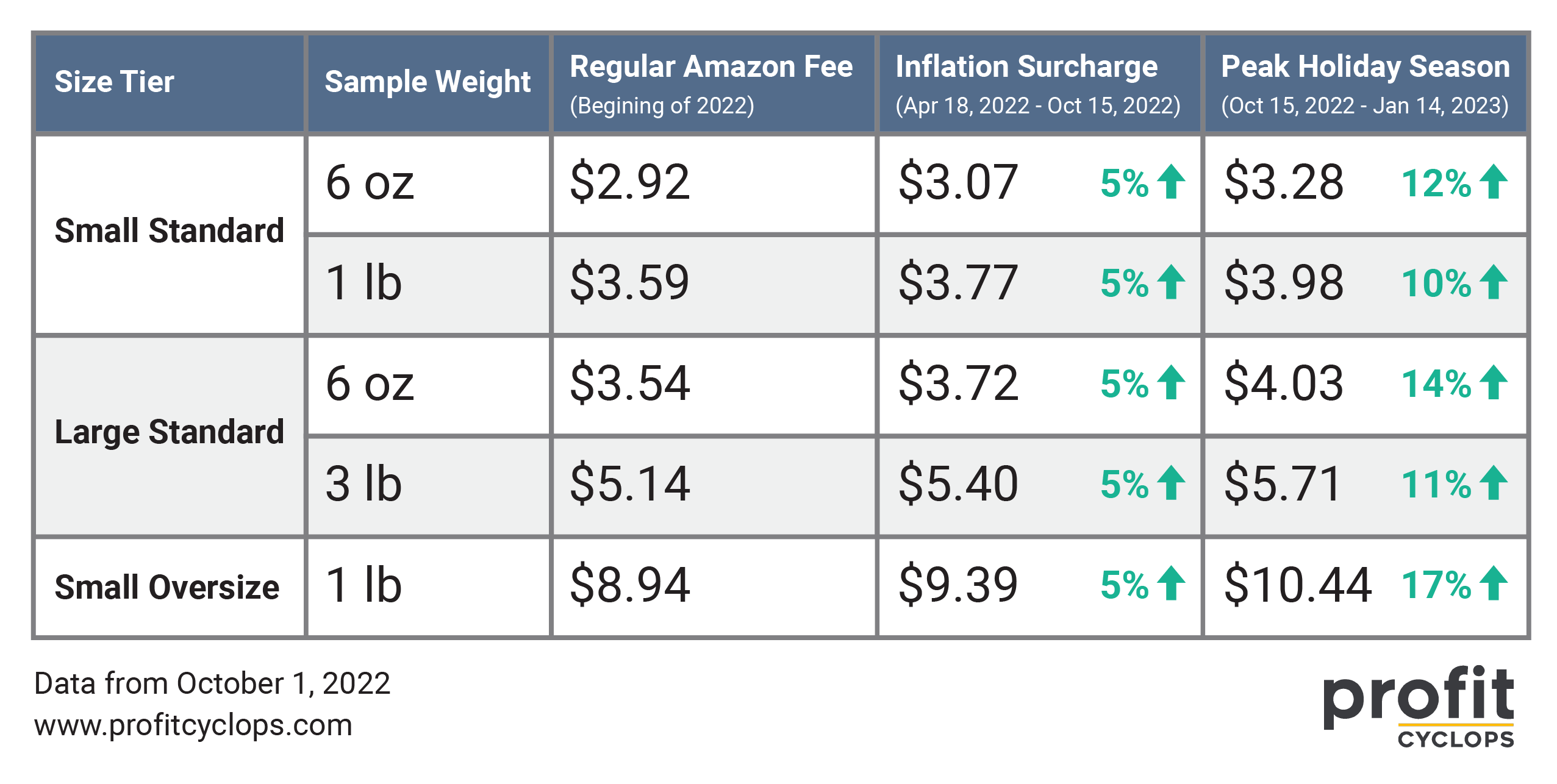 when they had to rapidly hire warehouse personnel to cope with a surge in online orders caused by the pandemic.

Amazon said that “expenses are reaching new heights,” meaning the previous strategy of absorbing any new costs became increasingly untenable. “Our selling partners are incredibly important to us, and this is not a decision we made lightly,” Amazon stated in an e-mail sent to all sellers – some of whom, because of Amazon’s market dominance, rely on them wholly or primarily as a marketplace.

What other Amazon fees increase during holiday season?

The new peak fulfillment fee is not the only fee that increases during Q4. Sellers pay monthly inventory storage fees for the space their inventory occupies in Amazon fulfillment centers. During the holiday season (October-December), Amazon also increases inventory storage fees from 0.83$ to 2.40$ per cubic foot for standard size and from 0.53$ to 1.20$ per cubic foot for oversize products. Therefore, when compared to the period January-September, FBA sellers will have to pay nearly three times more for the storage fee from October to December. 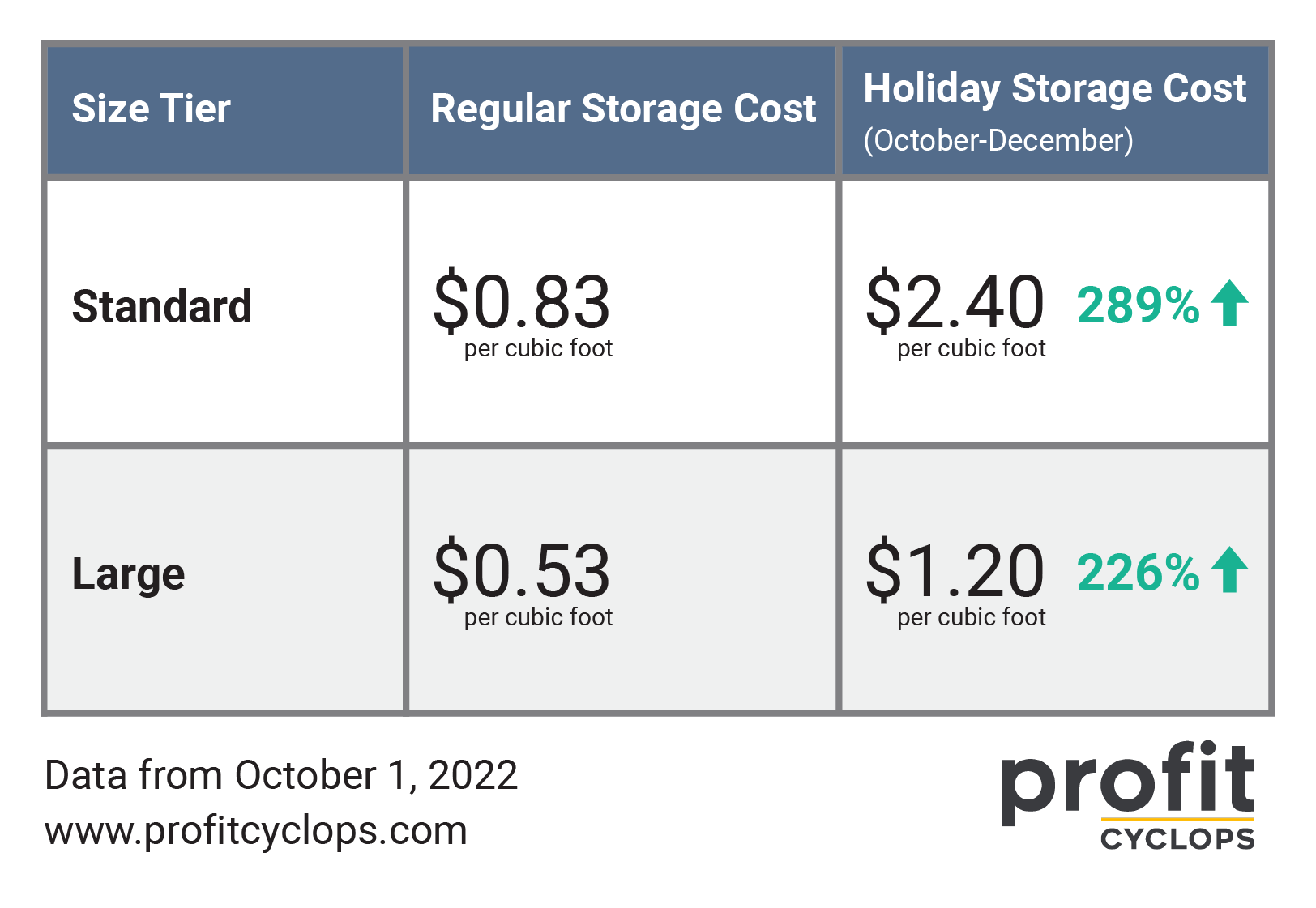 Let’s consider a seller which has the standard size storage on Amazon and assume that the quantity of products in Amazon inventory of this company is 35,000 and the cubic feet of those products is 1,600 cu ft. Once the inventory storage fee is calculated, we find out that the monthly storage fee increases from $1,300 to $3,800. That means you will pay an extra $2,500 per month and $7,500 in total for Q4. Please also remember that if you sell all 35,000 products on your Amazon inventory, you will be charged an extra $12,225 due to holiday peak fulfillment fee.

Moreover, ad CPA (Ads cost per acquisition-the amount you're charged for a conversion from your ad) increases approximately 36% during Q4, so you will pay an extra %36 for your ads based on the amount you allocate. Let’s consider a company allocates 10,000$/month for ads, then it will increase by 36% and reach an amount of $13,600. If we add up all three costs mentioned above, the company will pay an extra $30,550 to Amazon in Q4. 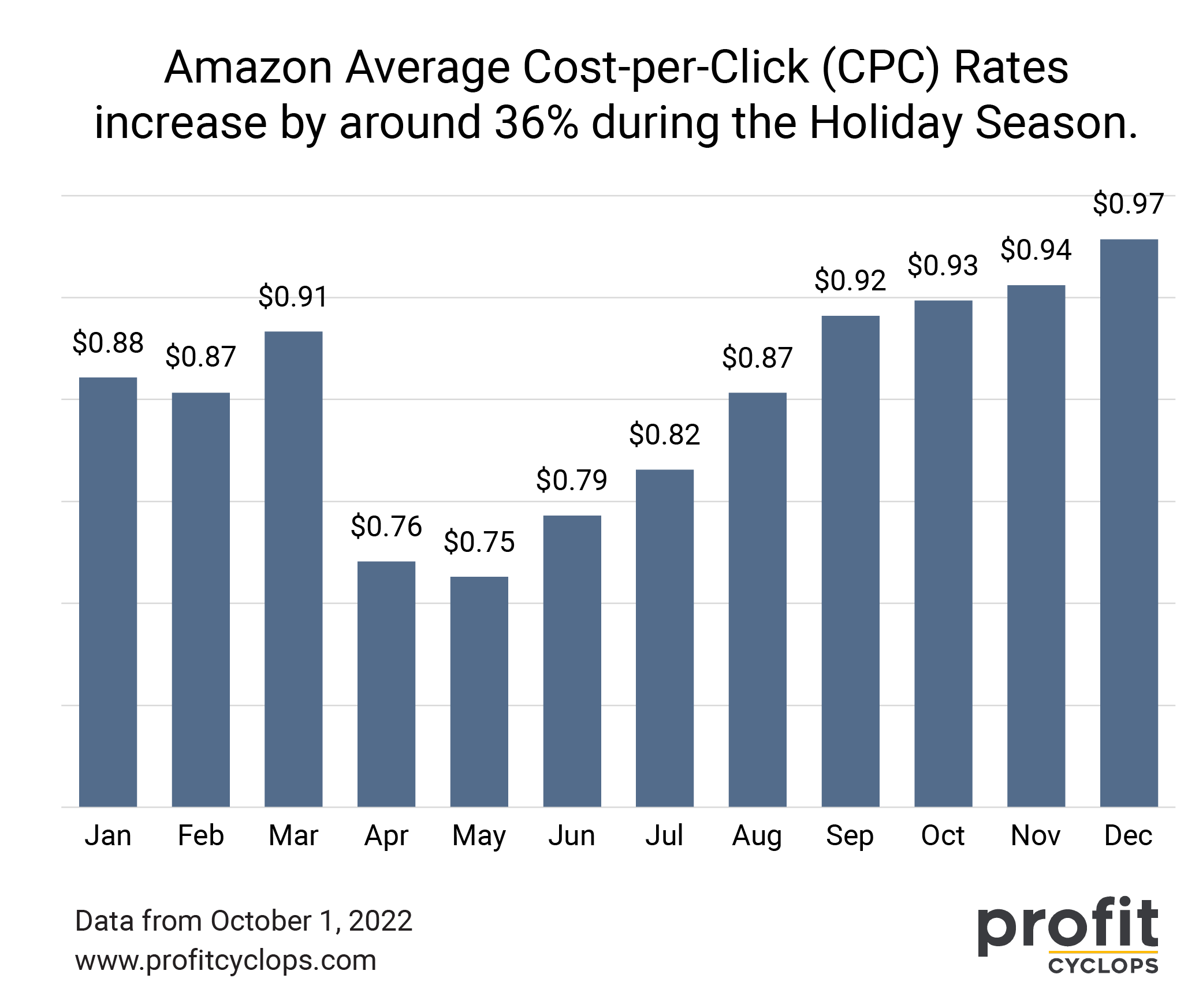 If you want to calculate the extra bill that you will pay for yourself, you can use the Profit Cyclops P&L report. Select the last 12 months and find the average spend for storage and ad expense for the last three months (June, July, and August). Multiply the storage cost by 3, ad cost by 1.36 and total units sold by $0.35. This will calculate approximately the extra cost that you will face during Q4. We have spotted these three areas for your reference below on a P&L report of demo account.

What can sellers do about increasing Amazon fees?

Surcharges during peak shopping periods are nothing new, however (UPS and FedEx often introduce surcharges at Christmas and other busy times), and only last week the U.S. Postal Service raised their prices to cope with additional handling costs.

Amazon has explained that while they are indebted to their Amazon sellers for their success, the additional holiday surcharge is an unfortunate measure to mitigate the reality of inflation felt in all sectors of the economy.

Countering the accusation that their monopoly status is a bad deal for sellers, Amazon maintained their services were still 30% cheaper than slower standard shipping methods, than other major third-party logistics providers, and an average of 70% less expensive than comparable two-day shipping alternatives.”

Despite increasing fees and total e-commerce revenue falling by 4% in the second quarter of this year compared to the same period last year, Amazon’s revenue from third-party seller services (fulfillment, shipping fees and other charges, etc.), saw a big jump of 13% to $27.4 billion. A whopping 57% of Amazon’s total units sold during that quarter came from third-party sellers. As can be seen from statistics, Amazon is still a great platform for third party sellers. For Q4:

Depending on the category you sold you can triple or even quadruple your revenues in Q4. Our data also shows that average seller can increase their Profit Margins by 30% with very careful planning. Although the fees are increasing so does revenues and profit margins.

Amazon’s meteoric rise in the retail space owes much of its success due to its ability to harness the power of third-party sellers to its e-commerce model. While over half of its revenue is due to such Amazon sellers, these retailers also rely on Amazon’s commanding presence for its global reach and large customer base.

Despite the surcharges, Q4 is always a great opportunity for most sellers. Savvy Amazon Sellers have learned that Profit Cyclops is a crucial part of their business plan to keep costs under control while the services offered by Profit Cyclops help them leverage the information it provides about their storefront to make the highest profits. Profit Cyclops allows Amazon Sellers to follow their metrics day by day and keep all the necessary data about Amazon fees, product costs, inventory, and so forth at their fingertips. Armed with this vital information, Amazon sellers can more successfully navigate the turbulence that comes their way as they steer their business toward increased profits.

It is ever more important to price your items correctly and be mindful of the hidden costs this season. We try our best to spotlight these pitfalls so you can earn more. Our trial is $1.99 for three months and this is the perfect time to get on board. Sign Up here if you don’t have an account and let us help build your Amazon Account no matter what fees Amazon throws our way. 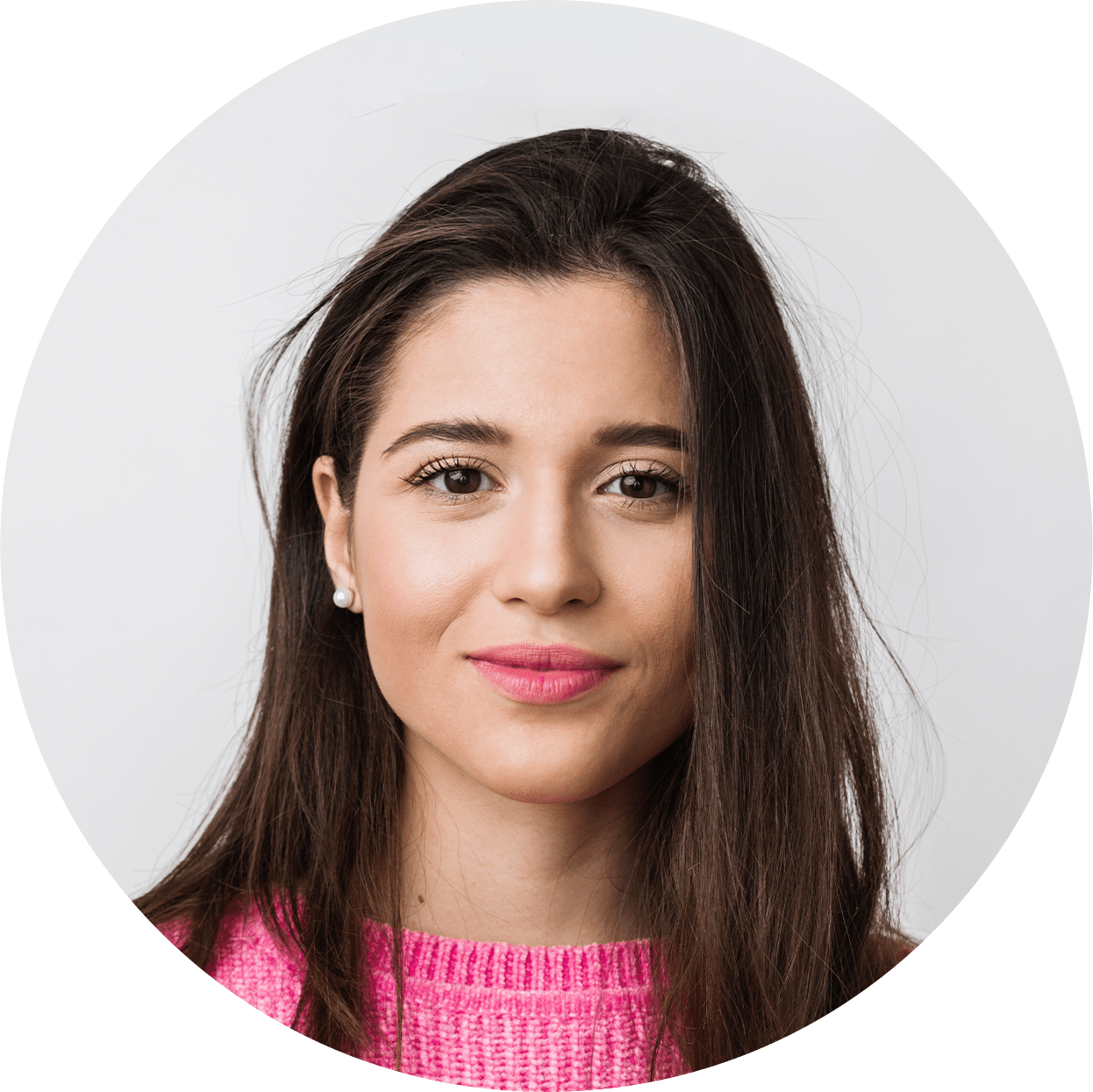